One of the most important dietary changes that I usually suggest in a consultation is to avoid sugar, in all its varying forms. For clients who are working to support gut ecology – that fine balance of friendly bacteria and unhelpful bacteria and yeasts in the gut – sugar intake can be one of the main ways in which yeast is encouraged. Just as you add a teaspoon of sugar to yeast to get it activated when you are making bread, so the regular consumption of sugar in the diet encourages yeast within the gut, which should only be present in minute amounts, to thrive and over-grow.

However, sugar isn’t just a problem for those needing to support gut flora. There is increasing research regarding how sugar might be behind the obesity, diabetes and heart-health that the West is currently experiencing.

The following excerpt from an article in the Guardian during the summer, makes some interesting observations on the level of sugar that is consumed by many children and young people. Perhaps a revelation to many is that even fruit juice is such a source of concentrated sugar. Yes, the sugar is fructose (fruit sugar) but if it is extracted from the fruit without any pulp and fibre, this is just another source of empty calories. 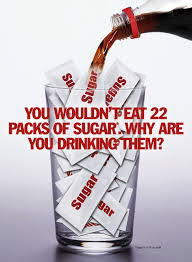 The tin of 7UP rolls to a stop at my feet. I pick it up, scowling at the kid on a bike who’d tossed it and missed the litter bin. The can is green and shiny: “Put some play into your every day,” it says. “Escape to a carefree world… Don’t grow up. 7UP.” And underneath, in tiny print, the real info (though you need a calculator to get to the truth): the lemon- and lime-flavoured drink contains a trace of salt, no fat, no fibre and 34.98g of sugar – eight teaspoons – and 135 calories. That’s enough energy for about 15 minutes’ cross-country running. It’s cheap, too. Half the price of milk.

If the stats are right, this teenager in Leith, who threw the empty tin, drinks 287 cans, or the equivalent, a year: more sugary drinks than any other child in Europe. Not to mention a whole lot more sugar, in breakfast cereals, bread, and even chicken nuggets. That is in part why Scottish children’s teeth are the same quality as those of children in Kazakhstan. And perhaps why a 2010 survey of 17 countries found that only Mexicans and Americans were fatter than Scots. 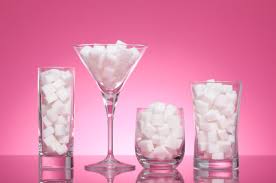 Of course sugary drinks make work for more people than dentists. Though the drinks and food industry still hotly contests it, a scientific consensus is now emerging that fatal problems can be traced back to excessive sugar consumption. Sugary drinks, addiction and obesity are inextricably linked: excess sugar in the diet may be a greater cause of obesity than fat is. Obese people suffer from diabetes, cancer, fatty liver disease, dementia and heart problems to the extent that their healthcare costs are double those of people with a healthy body mass. The “metabolic syndrome” maladies associated with insulin resistance and obesity – many authorities now just use the term “diabesity” – are expected soon to overtake tobacco as the leading cause of heart disease in the world. And perhaps of cancer, too.

Thus the “don’t grow up” line on that 7UP tin carries a grinding irony. Dr Robert Lustig puts it brutally: “The numbers don’t lie… as a rule, the fat die young.” He is a medical doctor and professor of clinical paediatrics at the University of California who has emerged as the guru of an increasingly noisy international campaign pressing governments to act as aggressively on sugary drinks as they have on tobacco. The two are seen as directly analogous – unnecessary habits that cost people and society dear. Lustig believes that children are at the forefront of the sugar-driven health crisis because soft and fizzy drinks are the most efficient way of delivering this “poison”. His word.

So the 7UP tin is quite an artefact. It shows capitalism at its most efficient and rapacious: where ingredients – sugar, flavouring, water – costing almost nothing can be turned into a profit margin measured in the thousands of per cent. It illustrates the extraordinary diversion of farmland and forest into the production of the almost useless while nearly a billion people on the planet are starving. The can is an icon of the key dietary changes of the era, where we upped our simple carbohydrate intake – sugar – to the point that it started harming us in ways never seen before.

A monumental battle is just beginning between the sugar and food corporations and governments, which know that society can no longer bear the strain of the polysaccharide habit. If the 40 years of war between government and Big Tobacco are anything to go by, the fight will be dirty. 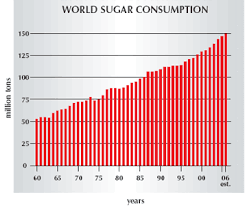 It’s a feature of modern life that the young have started getting the diseases of the old – problems with their hearts, their livers, cancers, diabetes and so on. That this may be triggered by the changes in our diet has been known for at least 60 years. During the Korean war, US army surgeons got a chance to do something unusual: perform autopsies on lots of young people. These found plaque in the American casualties’ arteries – even among the teenagers. But there were no blockages in the hearts and valves of the youthful Korean dead. At the time, this bizarre phenomenon was ascribed to the fat load in the GIs’ diet. But Americans who fought in Korea and Japan were fuelled by Coca-Cola and its rivals; and modern analysis now concludes that sugary drinks may have been the villain.

Most rich nations saw their sugar consumption increase by 30-40% between 1970 and 2000. In Scotland it quadrupled in 60 years. A key moment was the introduction of “high fructose corn syrup” (HFCS) – a fantastically cheap sugar made from America’s surplus maize (in Europe we manufacture something similar from sugar beet). American government subsidy for the corn farmers – and high taxes on imported sugar – made the product cheap and attractive. Though there were issues around taste, in 1980 Coca-Cola successfully switched to using HFCS. After water, sugar is, of course, the major ingredient in its product. Profit margins improved, and Coke’s rivals soon jumped aboard.

In the UK we eat and drink around 70% more sugar than the government says we should, and the obesity figures have been fairly stable since they peaked in the early 2000s. (Though with 30% of under-15s overweight, and consuming sugar just like adults, the epidemiologists are predicting the obesity rate to rise.) But our sugar consumption peaked in 1982 and the soft drinks manufacturers say that now 40% of carbonated drinks contain “no added sugar”. Why, then, have obesity rates not plunged? 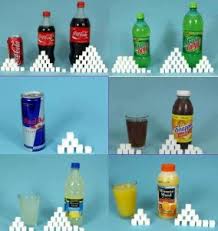 Sugar is sugar – a simple chemical, and it makes little difference whether it’s crushed from an organic, hand-picked fruit or fracked in a factory out of corn and beet. And fructose is just another of the monosaccharides that make sugar, though it’s the one with a friendly Latin-derived name. In fact fructose is the key to all sugar – it makes it taste sweet. Table sugar is half glucose, half fructose. The high-fructose syrups the drinks manufacturers use are probably – they won’t say – made of 55% fructose: more sweetness for the sugar load.

In my next post I will copy more of this article, particularly referring to fruit juice, and then I will look at some of the ways in which we can encourage children to drink more water.